Always Look on the Bright Side of Life: A Sortabiography

Why was Monty Python so successful? It wasn't really that new or different: 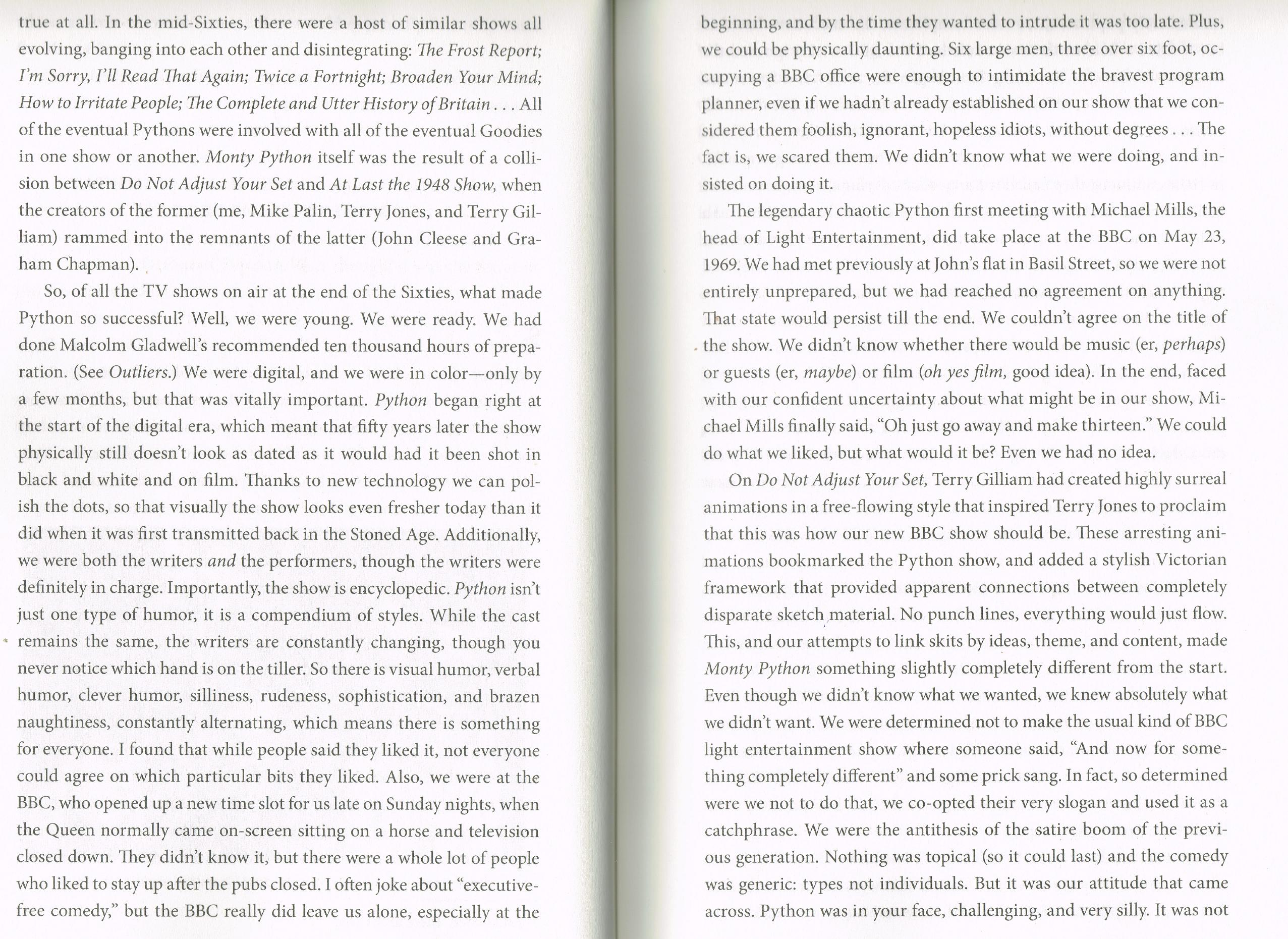 Idle's satirical Rutland Weeken Television "was filmed on a shoe string, Even the shoestring was borrowed."

Life of Brian $4.5m budget financed entirely by George Harrison (who mortgaged his house) purely bc he wanted to see the movie. Python's had no desire to knock Christ - the problem is his followers.

It's not the End of the World but you can see it from there.

"I have met many people in my life, and sadly, many of them were not famous. I agree it's not their fault, but I do think they cd have tried harder,"

Problem with fame is that people seem to think they have the right to bother you or shoot you or demand that you pose for selfies ... I always tell them I'm Michael Palin and to go fuck themselves, so I can help ruin his reputation for niceness.

"that's name-dropping at its finest, as I said to Prince Charles the other day. he wasn't there, but I like to talk to myself and if I pretend he's in the room it's classier."

Leslie Nielson dealt with fame with a fart machine that cd be hidden in yr hand. Get into a lift and people wd do a double take, look at each other, but before they cd get up the nerve to say something, LN wd drop a loud 'fart'. Then another, with LN keeping a total poker face. Then as got close to ground floor, he brought out the whole range - little ones, big ones, short ones, long ones, melodic ones, Handelian ones, starbursts, his repertoire was lengthy and relentless, his face a study of concentration as this terrible barrage unfolded.

Played at a Santa Monica Pier festival for comedians who played musical instruments. Cooked up a routine with Billy Idol. Jack Black gives a huge showbiz welcome to "one of the original Montys, please welcome Eric Idle!". Thunderous applauseand on comes Billy Idol. Crowd does double take then cracks up. Billy launches straight into "I'm a lumberjack ..." few mins later, Eric comes onstage "What the hell are you doing?""I'm doing the show" "It says Eric Idle" "No it doesn't, it says Billy Idol". We argued. We pushed and shoved. Finally Billy leaves the stage to a thunderous ovation, Then coes back on at the end to join in singing of "Bright Side".

George Harrison tribute show, Pythons came on as waiters and sang 'Sit On My Face", then at end, turned round and bowed to the big pic of George behind the stage, revealing their bear bums. "He wd have loved the sheer tasteless joy of what we did."

Pythons lost a lawsuit, and had to pay out a million pounds. Got hold of prof advice: "You're totally fucked" he said. "However," he added, "if you play one night live at O2 (arena), you cd pay off this debt immediately." So th final Python reunion began. The tickets were put on sale, and sold out in 34 seconds. Released tickets for next 4 shows. They sold out in 30 minutes. So had to add another 5 shows.

As part of show, spent a day filming Stephen Hawking and Brian Cox (Queen and astrophysics professor) on the banks of the Cam. Skit had Brian arguing with Eric about details of "The Galaxy Song", but in the middle of the complaint he is run over by Stephen Hawking in his wheelchair. In other words, spenta whole day talking to a couple of the most brilliant minds on the planet, and all we did was film a silly gag.

Steve Martin wrote blurb for an Eric Idle novel about Robin Williams (The Road To Mars): "I laughed. I cried. And then I read the book."

Sent (good mate) Billy Connolly a note congratulating him on his knighthood. Got a reply back: "As you rightly observed, I was knighted this morning, and, in my new position as Knight of the Realm, I have decided that I will no longer squander my good time by hanging out with scruff like you. So you can fuck off"

John Cleese got EI to join him for a book signing of his autobiography So, Anyway .... It sold out So many fans wanted to attend that the black market price was over a couple of hundred cash. "I know, bc I sold them."

Monty Python's Eric Idle has written a memoir, Always Look on the Bright Side of Life: A Sortabiography. The book, in which Idle recounts his adventures as a legendary comedian and actor in projects like the influential Monty Python's Flying Circus, the savage Beatles parody band the Rutles, and the totally underrated Nuns on the Run, is named after 'Always Look on the Bright Side of the Life,' the disarmingly sunny, ironic song Idle wrote, and then performed - during a crucifixion scene - in the 1979 Python movie Life of Brian. In this excerpt, Idle describes how the song totally got away from him ... in a good way.

"Always look on the bright side of life" has probably been my subconscious motto throughout my life, but I never thought it would be a hit. And not just in the Top 10 charts. On January 20, 2009, it officially became the number one most requested song at British funerals, replacing Frank Sinatra's 'My Way'. It has remained there ever since. Beating out even Elvis. You've got to love the Brits. First of all, who would even have such a chart? And secondly, of course you don't get paid for funerals, but hey, you take it where you can. It probably replaced 'Spam, Spam, Spam' at Viking funerals.

As far as I was concerned, 'Bright Side' was just the end song of a movie, but now it began to take on a life of its own. It began at Graham's [Chapman, fellow Python member] memorial. I was asked to sing it to close the event, as it was Graham's favorite song, and it was one of the hardest things I have ever had to do. I was still singing it to Graham, but now for the final time. He had died with exquisite timing on October 4, 1989, the eve of Monty Python's twentieth anniversary. We canceled a huge party we had planned, which wouldn't have been what he wanted, but it was how we felt. It was a shock. This was one of us. Mike [Palin] and Terry J. [Jones] were with him at the end. John [Cleese] wept inconsolably. I was at home writing a song for him, 'Life Will Get You in the End.' I finally finished it when George [Harrison] died.

A month before he died, Graham joined us filming Parrot Sketch Not Included: Twenty Years of Monty Python, a 72-minute celebration hosted by Steve Martin. I can still remember Steve's shocked look of horror as he watched an emaciated Graham being carried in. Nobody had warned him. Graham had lost a lot of weight after two operations on his cancer but he was his usual cheery self, cracking jokes about his condition, and we all did a sketch together with Steve interviewing us as schoolkids. We did another shot where Steve asked to-camera where all the Pythons were today and then opened a closet. We were inside. It would be the last time we were all together.

I had bumped into Graham at the Beverly Center in LA that January, and he had a big wide grin and looked hale and hearty and said he had a slight thing in his throat, nothing to worry about, but he was going back to London for a procedure. When I visited him at Cromwell Hospital after his second operation he looked in a very bad way, but he surprised me when he told me he was thinking of opening a longevity center! Perhaps he was joking. Maybe he was trying to cheer me up. Who knows, but it would be the last time I saw him.

On December 3, 1989, we all gathered in the packed Great Hall at St. Bartholomew's Hospital for his memorial, where I had to sing Always Look on the Bright Side of Life. It was particularly hard to get through, and I almost lost it. It was even harder because, thanks to John Cleese, the memorial had become a roast. He brilliantly broke the somber mood and turned solemn grief into relieving laughter with an outrageous parody of their 'Dead Parrot' sketch.

"Graham Chapman is no more. He has ceased to be. Bereft of life, he rests in peace. He has rung down the curtain and joined the choir invisible. And I say good riddance to him, the freeloading bastard. I hope he fries. And I say that because if I hadn't said something inappropriate he would never have forgiven me."

It was one of John's finest moments. It was inspired, it was fantastic, and he concluded by saying he would like to be the first to say 'Fuck' at a British memorial. From that point on, the afternoon became uproarious. Michael spoke about how Graham was always late, and whenever he had to pick him up for rehearsal, various heads popped out of windows saying Graham would be down in about twenty minutes, until finally Graham would emerge for work. Michael ended his eulogy by saying, "I'm not very sentimental, but as I look around at all these great people, I like to think that Graham is here with us all today. Well, not now ... but in about twenty minutes."

How ironic that Graham, who was always late, left so early.

That really should have been it for the song, except that it wasn't. Bizarrely, it was about to become a popular hit. I had become friendly with a neighbor, Gary Lineker, a brilliant footballer, the captain of England and Spurs and now the presenter of BBC's Match of the Day.

One day in 1991, Gary said to me, "You know they're singing your song on the terraces." Apparently, football fans had taken to singing it when their sides were losing helplessly.

Simon Mayo, a friend of Gary's and a BBC Radio 1 DJ, began playing the song every morning on his breakfast show, so it was getting a lot of airplay. Because of this, Virgin Records rereleased it as a single on September 23, 1991, and to my surprise it began to rise up the pop charts. It was strangely exciting as each week it rose higher and higher. It eventually got to number three, where it peaked after I had been persuaded to sing it on Top of the Pops, a deliberately chaotic performance with John Du Prez leading the band. Simon Mayo said it was because I had sung it on Top of the Pops, and he may well have been right, but it did get to number one on the ITV charts, and, even more satisfying, it became number one in Ireland, which was great because the movie had been banned there, and the soundtrack album on Warner's was withdrawn and pulled out of record stores after protests when it was first released. A fitting revenge.