Friend wrote him to say 'I met Kasmin, your gallery dealer, and when your name came up he just happened to have 500 photos of your work in an inside pocket.'

'If you enter a room where someone is standing naked, you don't notice the wallpaper. When you walk into a room you don't notice everything at once, and, depending on your taste, you observe things in descending order. Alcoholics notice the booze first, florist the flowers etc.'

H tries to keep control of who buys his paintings. But at a NY show his Portrait of an Artist was sold to a fast-talking fan for $18,000, but then reappeared at a German art fair a few months later where it was sold for three times that. "People made far more from the painting than either I or my dealers had. Considering all the work that had gone into it, it seemed such a cheap thing to do .... " 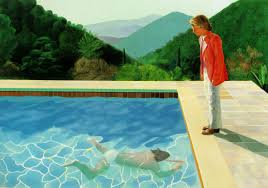 Problem that once he became successful, much less motivation to turn out paintings. "I worked it out - I don't need to paint more than 10 a year unless I want to."

H hated the film A Bigger Splash (thought it showed too much of his personal distress at a relationship breakup) and tried to buy it to suppress it. But eventually decided it was wrong to try to suppress the work of another artist. The filmmaker visited H in his studio and commented on a portrait H was working on. H got the point "If Shirley and Gregory say they don't like the picture, I'm not going to destroy it if I like it."

When his parents finally got to see the film his mother's recorded in her diary "I am, I suppose bc of my upbringing puritanical, but am eager to learn & to broaden my mind according to the times without lowering my standards and principles .... I suppose he leads a very different life to ours but I can accept it & only pray that my boy keeps clean ad good as he has always been to us. I have learned to accept the world & our beliefs in a broader way & realize how much more our children have gained knowledge and understanding more than we ever did." In contrast his father called it "muck" and said "David should get some new friends."

Commissioned to design staging for an opera. "When you are working in a new field you are much less afraid of failure. You kind of half expect it, so you take more risks, which makes it more exciting."

An American socialite "... bought a painting of mine and she was one of those rich women with quite a lot of money and not many friends who thought they could take you over if they bought a painting."

Hockney and friends invited to stay at Chateau Mouton Rothschild by the Baron (commissioned him to do a label for wine, tho it was never used). The 'ordinary' wine we were served with lunch was from 1927. Hockney: "I must tell you, Philippe, that this is the best home-made wine I've ever drunk".

"I always refer to him as Vincent, because the English say "Van Goff", the Americans say "Van Go" and the Dutch say "Van Goch."

Little Venice - "A sunny, naked version of Bohemian Portobello Rd ... it's always sunny ... it's got the energy of the US with the Mediterranean thrown in."

NYC bathhouses in 70's: "you could cruise at will, approach whoever interested you, handle the goods, then go to your room with them ... then you could go to the lounge and get to know someone you just had pleasurable sex with."

Roundabout way that he came to expt: In 1982 the Pompidou persuaded him to let them put on a show using some of the 20,000 photographs he had taken. The director came over to LA and spent 4 days selecting a hundred or so images he wanted. But the problem was that Hockney had never indexed his huge collection of negatives. Solution was to buy up huge quantities of HQ Polaroid film, take shots of the photos the Pompidou wanted, and then leave it to H's assistant to find the relevant negatives. But when they finished, they left a large quantity of unused film, so H started experimenting with it.

He was thrilled because he realized that whereas he disliked photos because they froze a single moment, with a collage of polaroids he could construct a narrative. The Cubist idea that you could describe something from different angles.

Conventional paintings put you outside - you are a viewer looking in. Picasso's Cubist paintings that show two sides of a head, for example, put you in the painting. Picasso makes you a participant rather than a voyeur.

British Museum spent hours looking at collection of Chinese scrolls such as the 70 foot long A Day On The Grand Canal With The Emperor. The inspiration for his long paintings.

Getting huge prices for his paintings - a huge vista of the McDermott house in Echo Park went for $240,000, while a large print of the McDermott's backyard got $100,000, a record for a work on paper.

Then, at the 1986 Royal Academy Summer Exhibition, Hockney had 3 lithograph editions, each of which had 5 figure price tags, with a total cost of nearly £3 million. Some reviewers got upset at 'a licence to etch money'.

His home town of Bradford needed a boost, so they came up with slogan 'Bradford's bouncing back'. Hockney got on board with a print Bradford bounce, which showed a ball bouncing back and forward across the page. The readers of the local [paper could buy copies of the original print for 18 pence.

As a riposte to the criticisms of previous year, for 1987 Summer show Hockney offered another 10,000 copies of 'Bounce', still at 18p. One suggestion that the price came from some old doggerel:

Polly Collins had no sense,
Bared her bum for eighteen pence.
But for those with more to pay,
She turned around the other way.

Asked to exhibit at a Brazil biennial, but lacked paintings to provide. So sent faxes which were then assembled on wall. Hockney had meant them to be thrown away after the show, but what they did was cut down the whole wall the prints were stuck to.

Jonathan Silver, a man with "boundless energy and enthusiasm for art, which could take off in a thousand directions." Hockney met him in 1963 when the 13 yo wrote to him to ask him to design the cover for the Bradford school magazine. (Hockney had just won the Royal College of Art gold medal, so a very cheeky request).

Bought one of first digital cameras, to go with his top-end colour photocopiers. He photographed every visitor, always posed in front of Pacific Coast Highway and Santa Monica, and when that went off to an exhibition, painted a similar one as a backdrop. That linked all the disparate images. The photos were shot by moving the camera vertically down the subject, producing 5 or 6 images which were then stuck together, to make life-sized portraits.

When he published Secret Knowledge he was pilloried by people who thought he was saying that the Masters cheated. A few (Chuck Close) pointed out that artists always used any available tools to make their life easier.

iPhone with Brushes app. "Who would have thought that the telephone would bring back painting." Then got iPad and found that you could play back the drawing - something completely new.